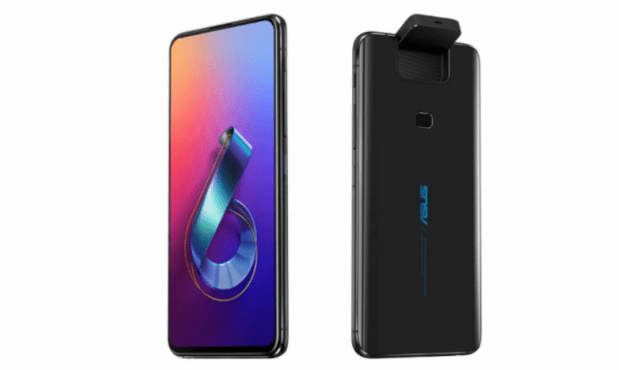 I’ve just been told that the retail price of this is gonna be starting at around 499 euros, which is 50 euros cheaper compared to the regular OnePlus 7. Let’s see what you get for that price. Nice black box here.We’ve got a six in a reflective material with the ZenFone logo. And I believe this indicates the small bezels of the device. And on top here, it says flip camera.We’ll of course be looking at that in some more detail. Right, so inside the box, ZenFone 6, defy ordinary, with a few of the specifications.We’ll come back to that in just a second. So as well as the device, you get a charger, a USB type A to USB type C cable, some 3.5mm earphones, which is a good sign, with some ear tips, some paperwork, a SIM card ejector tool, as well as a hard plastic case. Right, let’s get to the device and remove the plastic.There we go. And here is the device from the back and also from the front.

So up front, there is a 6.4-inch, full HD+ NanoEdge display and we’ve got minimal bezels.There is a little bit of a chin, but the screen-to-body ratio is very, very good, ASUS is saying around 92%. Right, so where is the front-facing camera? Well, ASUS explored lots of different options. They were initially gonna go with the dewdrop, but they realized that lots of other people will be also doing that. So they tried to go for something different, and this is where things get quite interesting. Let’s have a look around the back. So here you’ll notice a dual camera module.The primary camera is 48 megapixels with around an f/1.8 aperture. And then we’ve got a 13-megapixel, ultra-wide with a 125-degree angle of view. So what’s so special about these cameras? Well, if we open the camera app, and we go into selfie mode, you’ll see that the camera module actually flips out and it rotates 180 degrees, which is pretty cool. So to achieve notch less displays, we’ve seen lots of different solutions.We’ve seen sliders, we’ve seen pop-up cameras, but I believe this is the first time we’re seeing a flip-up camera. Now, to be able to achieve this while still keeping this module strong, ASUS have used liquid metal, which is amorphous alloy. I don’t even know what all of that means, but basically, this is 20% lighter compared to stainless steel, but four times as strong. Of course with durability, we’re gonna have to put this through lots of tests, but there is a G-sensor, which will detect drops and automatically retract the camera, so that should keep things durable. And the biggest advantage of having a flip-up camera like this is the fact that you’re gonna get the same cameras on the rear as well as on the front.

So that means you’ve got a 48-megapixel front-facing cameraas well as an ultra-wide for your defies. They’ve not been able to get an optical image stabilization in the size of this module, but you do have electronic image stabilization all the way up to 4K at 60 frames a second. And what’s really cool is that you can film 4Kfrom the front-facing camera at up to 60 frames a second. I don’t know of any other smartphone that can do this. With the Samsung Galaxy A90,as soon as you switch to front-facing mode, even though it was the same rear-facing cameras, which would flip up and rotate, you’d still only have 1080p. With the ZenFone 6, you’ve got 4K up to 60 frames a second from the front-facing cameras. How good these cameras actually are, of course we’re gonna have to do lots more testing. Once I’ve got the latest software on here, I can go out and take lots of pictures. Right, so that’s the flip camera, what about the rest of the device? Well, we’ve got a pretty premium build.We’ve got a metal frame with 3D Gorilla Glass, which curves into the back and does make this pretty comfortable to hold. It’s around 190 grams in weight. That’s impressive because the ASUS ZenFone 6 has a massive 5000mAh battery. I’m pretty sure that’s one of the largest, if not the largest battery in a regular-sized flagship smartphone. That should get you through a long time. Of course, I’m gonna have to use this a lot more to see exactly how good the battery is, but 5000mAh, that’s amazing.The ZenFone 6 is available in two colors, Midnight Black and Twilight Silver.There’s a fingerprint scanner here at the back, which works in 0.3 seconds. Very fast indeed. And if we take a look around the rest of the device, at the top, we can see a secondary mic, as well as that flip camera module.

On the right-hand side, there is a power button in the middle, there’s a volume rocker, and then we’ve got an additional button. This is smart key, which can launch Google Assistant, so pressing it once is gonna bring up Google Assistant. If you press it twice, it’s gonna bring up all of your cards, and if you press and hold, it’s gonna act like a walkie-talkie. On the left-hand side, we’ve got a SIM card tray, and this has triple slots, two for SIM cards and one for a micro SD card, so you can expand the storage on here. But as well as that, you can have two SIMs active at the same time, which is really good. At the bottom, there is a USB type C input, your primary mic, a 3.5mm jack, which we don’t see much of these days, so I know a lot of you guys will be happy to see that. And then we’ve got a bottom primary speaker, but the ZenFone 6 does have stereo speakers. So as well as the bottom primary speaker, we do have one up here in the earpiece. For software, we’ve got Android Pie with ASUS ZenUI 6. Internally, this is powered by the latest and greatest Qualcomm Snapdragon 855.You can get up to eight gigabytes of RAM with 256 gigabytes of storage.The pricing I mentioned at the start of this video,499 euros, will be for the base model, which has six gigabytes of RAM with 64 gigabytes of storage. I gotta say, that’s pretty impressive for this package. I believe this is one of the cheapest devices you can buy that supports the Qualcomm Snapdragon 855 processors.I’m really interested to spend some more time with this flip-up camera.I do like the idea of using the rear-facing cameras as the front-facing cameras as well. And the fact that you can get 4K up to 60 frames a second from the front-facing cameras is definitely quite impressive.

Also Read |  CES 2020: Google Assistant Will get These New Options