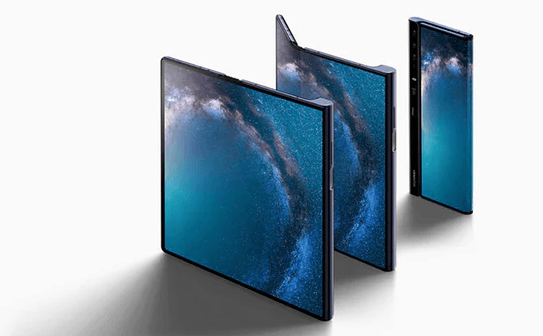 Huawei have just announced the foldable phone the Huawei Mate X.I managed to get an early look and here’s everything you need to know.2019 seems like it’s going to be the year of the foldable phones.We had the Galaxy Fold come out a few days a go and Huawei’s answer to that is the Mate Xand I got to say, it looks pretty impressive.As opposed to the Galaxy Fold, which has two displays,one on the outside and an inner foldable display,the Mate X actually has a single flexible OLED display which kind of folds on the outside.When completely folded out the display is eight inches with a resolution of 2480 by 2200and we’ve got a pretty small uniform bezel all around without a cutout or anything like that and when you’re looking at it head on you pretty much see all screen.That’s when it’s out flat but when you fold ityou get two displays, a six point six inch display,the front, and a six point three inch display, the back.

Now it’s using what Huawei are calling the Falcon Wing hinge mechanism which does fold pretty flat, unlike the Royolo flex Pai which had a massive gap in between.When folded back like this it’s one 11 millimeters thick which is pretty reasonable and when it’s completely folded out it’sjust five point four millimeters thin which is thinner than the iPadand there’s a thicker strip on the right hand which kind of acts like a grip when you’re holding it in one hand and that also houses the Leicatriple camera set up, the USB Type-C inputas well as a side-mounted fingerprint scanner.Now Huawei haven’t specified what these cameras are exactly but I’m assuming it’s going to be a similar setup to the Huawei Mate 20 Pro where you have a regular angle of view, a ultra-wideas well as a telephoto.What’s interesting is that you can use these same cameras for selfies as well because you can use the back display to see yourself or when you’re takingpictures of other people, they can also see themselves on the back display which is really quite cool.Now it has two batteries on either side of the fold which total around 4,500 mAh.Now that’s only slightly larger compared to the Huawei Mate 20 Pro so it’ll be interesting to see how long the battery lasts on this.

Also Read |  The Morning After: Uber units its sights on Postmates

The good news is that we do have 55 watt Huawei SuperChargeso that’s much faster compared to the Huawei Mate 20 Proand Huawei have said that this should give you85 percent charge in around 30 minutes.That is absolutely insane.It might not be exactly that but just the factt hat it can charge at 55 watts is pretty crazy.It’s powered by the Kirin 980 processor,like the Mate 20 Pro is, but it’s also got the Balong 5000 chipset which is going to enable five G.You’ve got quad five G antennas and that will give you a downlink of up to four point six gigabits a second so that’s up to 10 times faster compared to four G and Huawei have also said that it’s twice as fast as the current industry standard.So that’s everything we know so far about the Huawei Mate X.What are my thoughts?Well, I have to say it does look really impressive but there’s lots of questions that I personally have.How is that fold going to be?Is there going to be a crease in-between?Having a quick look at it I could notice a bitof those fold lines so how is this going tobe in day-to-day usage but also how durable is it going to be because the display is always fully exposed even when it’s in your pocket,unlike the Galaxy Fold where the inner display kind of folds in on itself and you have to remember that this is not glass.Glass is not flexible so it’s using some form of plastic so I’m not sure how easily that will scratch. it’s so cool to see all of these different foldable implementations.I’m really looking forward to checking it out.