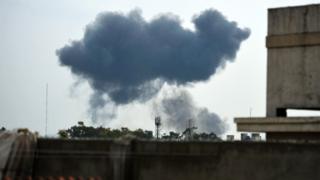 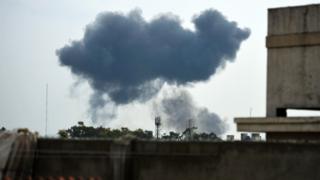 The aircraft crashed close to the Shakarparian space

An F-16 fighter jet belonging to the Pakistan Air Power (PAF) has crashed close to a park within the capital Islamabad.

In an announcement, the PAF stated the plane was finishing up rehearsals for the nation’s Republic Day parade to be held on 23 March.

Police and safety forces have now cordoned off the positioning close to the Shakarparian space, which can be close to a number of museums and golf golf equipment.

The PAF stated it had ordered an inquiry into the reason for the crash.

Footage posted on social media, seemingly shot from close by buildings, confirmed the second the aircraft got here down and smoke and flames billowing into the sky.

The destiny of the pilot and co-pilot was not instantly clear.

“Pakistan Air Power studies with remorse PAF F-16 plane crashed close to Shakarparian, Islamabad in the course of the rehearsals of 23 March parade,” the air power stated in its assertion.

“Rescue groups have been dispatched in the direction of the positioning of the crash.”

It added that “a board of inquiry has been ordered by Air Headquarters to find out the reason for the incident”.

A PAF spokesman additionally instructed Reuters information company that they had been “ascertaining the losses”.