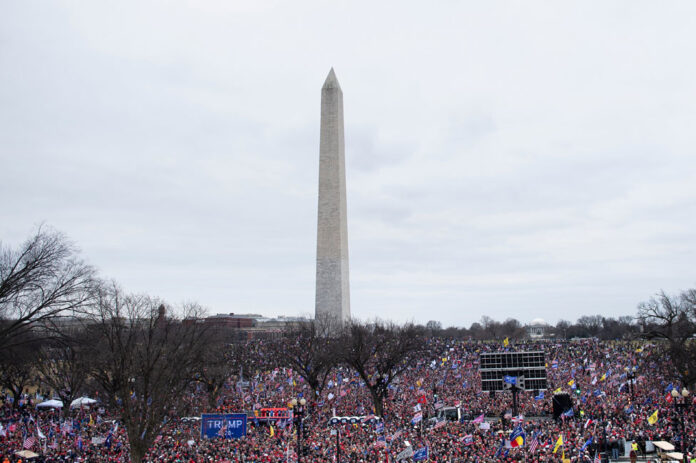 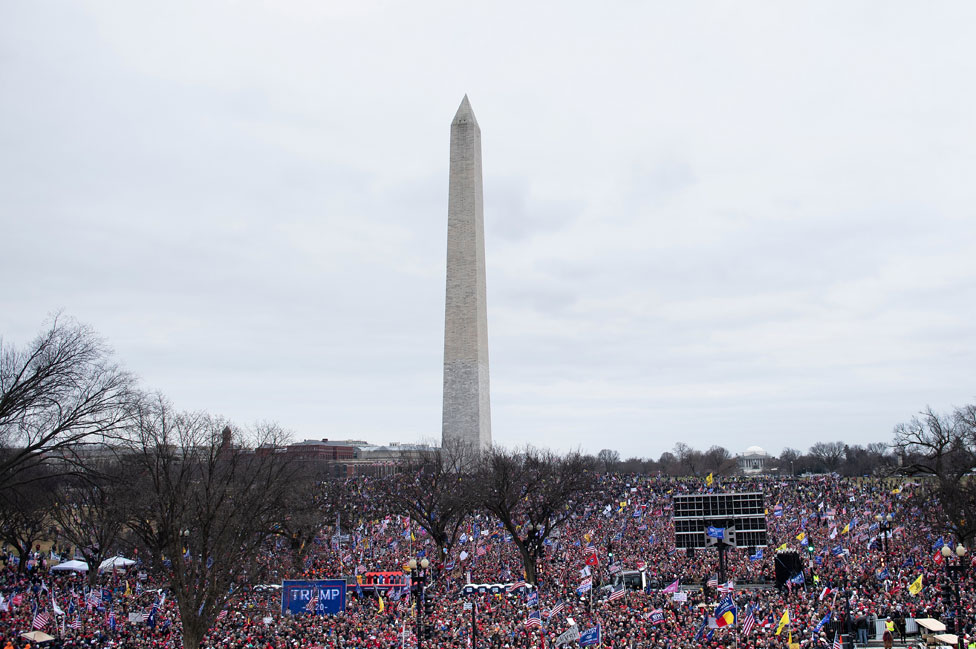 Donald Trump has been impeached for inciting a mob to attack the US Capitol. So what did the president say prior to the violence?

Thousands gathered at a “Save America” rally organised to challenge the election result and they listened as Mr Trump spoke to them near the White House.

In a 70-minute address, he exhorted them to march on Congress where politicians had met to certify Democrat Joe Biden’s win. The attack began moments after he took the applause.

Those words have now played a central part in his second impeachment, which happened after a day of debate in Congress.

So what did he say? Here are five key quotes, followed by some legal analysis from Professor Garrett Epps of the University of Baltimore.

‘We won this election, and we won it by a landslide’

This is three minutes into his speech and repeats a false claim that Democrats say is the starting point for the incitement charge – not just because he said it on this day but for weeks before.

This quote appears in the articles of impeachment – the charge sheet – prepared by Democrats and which was backed by the lower chamber of Congress on Wednesday.

In the months preceding the Joint Session, President Trump repeatedly issued false statements asserting that the Presidential election results were the product of widespread fraud and should not be accepted by the American people or certified by State or Federal officials. Shortly before the Joint Session commenced, President Trump, addressed a crowd at the Ellipse in Washington, DC. There, he reiterated false claims that “we won this election, and we won it by a landslide.”

It now goes to the Republican-controlled Senate for a trial.

‘We will stop the steal’

Here Trump is echoing the hashtag of the movement to fight Mr Biden’s election victory, which was started a day after the result was declared. It soon gathered pace on social media and led to rallies across the US. The largest one yet was the one Trump was addressing in this moment.

This is Mr Trump saying in the clearest terms yet that he will never accept Joe Biden’s win. And this time he is exhorting his supporters to join him.

He went on: “You don’t concede when there’s theft involved. Our country has had enough. We will not take it anymore.”

At one point, the president says the Biden presidency has to be challenged.

“You will have an illegitimate president. That is what you will have, and we can’t let that happen.”

This is the longest quote from Mr Trump’s speech that appears in the charge sheet. It could also be the one that his lawyers will find hardest to defend if the impeachment goes to trial in the Senate.

He also wilfully made statements that, in context, encouraged – and forseeably resulted in – lawless action at the Capitol, such as: “if you don’t fight like hell you’re not going to have a country anymore.”

This is the part of Mr Trump’s speech that his defenders have seized on to show that he never incited the crowd.

He said: “I know that everyone here will soon be marching over to the Capitol building to peacefully and patriotically make your voices heard.”

The language is very different from other sections which borrow more from combat or war.

‘We are going to the Capitol’

The president uses “we” but he didn’t join them as his supporters took the short walk from the rally to Congress.

He said: “We’re going to walk down to the Capitol and we’re going to cheer on our brave senators and congressmen and women, and we’re probably not going to be cheering so much for some of them.”

What is incitement under the law?

Incitement is not a crime under the First Amendment unless it meets certain criteria. First of all, it has to be intended to cause violence (and you infer that intent from the circumstances). It also has to be likely to cause violence. If I go downtown and I say to two drunks standing in front of a bank “let’s rob this bank right now”, I haven’t really incited anybody because it’s not very likely they’ll rob the bank. It has to be likely to cause – and this is very important – imminent violent action.

If I say let’s meet here tomorrow and rip things up, I’m not inciting because – in the words of the Supreme Court – where there is time for better counsels to prevail, the remedy for speech is more speech. So it needs to be directed to and likely to cause imminent violent action.

If this was a court of law, does Trump cross the line?

It’s quite rare that somebody can be convicted of incitement. In applying that to the president’s speech at the Wednesday rally, it’s an agonisingly close case. It’s pretty goddamn imminent because he’s telling people to march to the Capitol and I will march with you. There wouldn’t be any time for better counsels to prevail because you’re just going to leave the Ellipse and walk down Pennsylvania Avenue. He says we have to fight and show strength, but he also said we’re very peacefully and patriotically going to ask, so he’s covering himself. In the end, I think it’s a jury question.

I’m not sure he’s entitled to a dismissal of charges as a matter of law. There’s some discussion that government leaders have more leeway, but I don’t know how that would play out. He clearly knew there were people in that crowd who were ready to and intended to be violent, and he certainly did nothing to discourage that. He not only did nothing to discourage it, he strongly hinted it should happen.