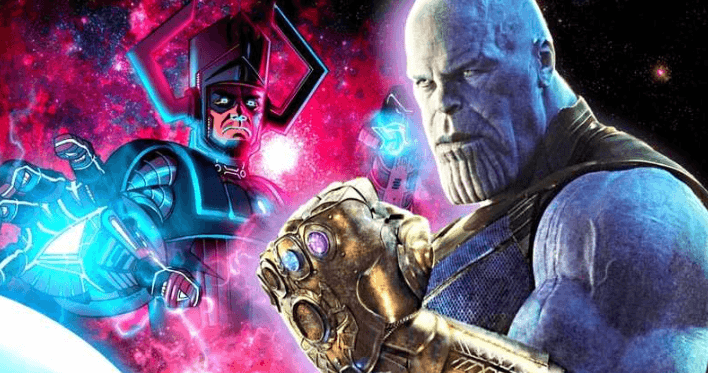 Thanos is arguably one of the most over powered villains in the history of comics. And hey, we’re not complaining; the Infinity Gauntlet is perhaps one of the greatest story arcs from Marvel, with Thanos being one of the most complex and fascinating characters to ever grace their panels. Now that his big screen adaptation has wiped out half of all living things in the MCU, we can’t help but wonder what other kinds of villains are capable of doing far worse. In the past, many have. So today, we’re counting down the top 10 super villains who are stronger than Thanos.We’re talking Thanos at his base level, without the Infinity Gauntlet, although a few of these villains could rival him with a few of the stones on his fist. And some of these villains are on par with the mad titan. So with that in mind, let’s get to it!

10. Galactic
Without the Infinity Gauntlet on his wrist, Galactus would completely smash Thanos. He is an entity that operates without regard to the morality or judgments of mortals, and drains living planets of their energy, feeding his insatiable hunger. A literal living force of nature, Galactic has a mastery over the power cosmic, which means he has universal cosmic awareness, is capable of telepathy and telekinesis, the transmutation of matter, the creation of force fields, energy projection, size alteration, the creation of life, resurrections, creation of inter dimensional portals, the ability to manipulate souls, memories and emotions, and can even cause mass scale events like recreating dead worlds or destroy multiple solar systems. All in all, Galactic is wickedly strong.Galactic has proven to have very few weaknesses, one of which is the ultimate nullifer, an object that is capable of destroying and remaking the multiverse.

9. Molecule
Man Owen Reece aka Molecule Man has two incredibly strong powers; reality warping and molecular manipulation. While sometimes he’s a bit of a reluctant hero, the character, including during his introduction story arc, was a villain. First appearing in Fantastic Four issue 20 in 1963, Molecule Man, according to DoctorDoom and Reed Richards, is a multiversal composite entity, a single creature that manifests fractions of its entire being in each universe that’s a part of the Marvel multiverse. In the Ultimate universe, Galactic believes that Reece is capable of destroying him with a single thought. He is a living bomb, capable of destroy the entire universe that he’s inhabiting if he dies. That’s just something Thanos, sans infinity gauntlet, would have a real tough time trying to take on.

8. Akhenaten
Akhenaten is one of several god like deities that appear on our list. And his defeat of Thanos takes a slightly different turn than most; while he may notwin the battle, he wins in the long run. Let’s jump back a sec though. For starters, Akhenaten from Earth 4321, in which he enlisted into the aid of the Celestial Order.Thanos is all like, damn, I want his power, and manages to reach the source of it, thereat of the Universe. He claims the power for himself, which ends up writing Akhenaten and the Order out of history.BUT it severely backfires on him, and he ends up sacrificing himself to set the universe right, with no one ever knowing he was responsible for doing so. But if we look at this from purely a versus perspective, Akhenaten and Thanos, who have fought in the past, are pretty much evenly matched, but only when Thanos has the power from the Heart of the Universe. Were he to face off against 616 Thanos, that might be a different story. Plus, it was Doctor Doom who eventually managed to erase Akhenaten from history, although arguably, that was all part of Thanos’ master plan. Dude has this ex-pharaoh beat intellectually, that’s for sure.

Also Read |  PHOTOS: Mira Rajput's printed athleisure apparel appears to be like tremendous stylish and easy; Test it out

7. Amatsu-Mikaboshi
Amatsu-Mikaboshi, also known as the ChaosKing, is a demonic god of evil whose best known for fighting Thor and Hercules in the panels of Marvel comics. Based off of gods from Japanese mythology, the character first appeared in Thor BloodOath issue 6 in 2006, Mikados existed billions of years ago before Earth had formed, reigning the dark, primordial void that existed before it. When Shinto gods populated this space, Mikados was enraged, and was forced to live in the netherworld, remaining there for centuries. What can the Chaos King do? He’s got demonic mystical powers, he can shape shift, he can travel through dimensions, he is immortal, he can absorb and enslave anything and anyone into void, which also includes other immortals. He’s telepathic.He can manipulate matter and souls.He can control the unread, and resurrect the dead, and to top it all off, he has the ability to destroy and absorb universes. Joy.Mikados is actually one aspect of Oblivion. But more on that fellow later.

6. The Beyonder
The Beyonder first appeared in the comicsin Secret Wars issue 1 back in 1984, orchestrating the events of that story arc, having captured the heroes and villians of the marvel universe forcing them to duke it out on a planet calledBattleworld.The character was initially an unseen self declared omnipotent entity, but later would take the form of a Caucasian human male. So, what can the Be yonder do? For starters, he’s an infinite dimensional entity that has near omniscience, near omnipotence, and is omnipresence in the beyond realm. He’s super OP, and often, much like thanos, his one weakness is himself, often being portrayed as emotionally fragile. Over time, in the comics, after his initial appearances, he was downgraded somewhat, with other cosmic entities having gotten a bit of an upgrade to make them higher up on the power chain than he was. But regardless, he’s still capable of warping reality, manipulating and controlling matter, energy and reality at a cosmic level that is at minimum on par with some of the strongest cosmic entities out there in the Marvel universe.

5. The Phoenix
Force Ah another powerful entity.The Phoenix force is a cosmic entity that first appeared in Uncanny X-Men issue 101back in October 1976. It’s an entity that has vast abilities when it comes to manipulating matter and energy, along with powerful psionic abilities that include telepathy and telekinesis. It has cosmic awareness and prescience. In addition to that, perhaps the deadliest of its powers is the fact that it can manipulate life force; something it can tap into reserves of for future generations, ultimately denying those generations their existence. It migrates through time and space by collapsing itself into somewhat of a black hole then reforming upon its destination. And, with powers to that variation, the exact extent of them is unknown. If it’s avatar or host is harmed or killed, it will form an egg of cosmic power, incubate and then hatch, completely healed. So yeah, pretty darn powerful.

4. The Goblin
Entity Also known as the Goblin Force, this entity exists on Earth 1298, and was born at the beginning of reality during the Big Bang.On its earth, it’s stronger than the Phoenix Force, and has limitless power, along with an insatiable hunger, which allows it to absorb massive amounts of energy from cosmic level entities including the Celestial, the Be yonder, and Galactic, too.The extent of the Goblin Entity’s powers are unknown. But we do know it is the nexus of all psionic energy, it’s telekinetic, telepathic, is considered one of the greatest spell casters in the universe, it’s immortal, can manipulate on a cosmic level to destroy planets and galaxies, it can transmigrate through time and space, it can manipulate matter on a sub atomic level, it can teleport, and it has complete control over time. So yeah, Thanos has got a run for his money there.

Also Read |  Coronavirus: Queen To Name For “Self-Self-discipline And Resolve” In Uncommon Televised Deal with

3. Oblivion
Oblivion is often considered to be one of the foremost powerful beings in Marvel comics. A cosmic entity who came into existence with the creation of the universe, Oblivion hasn’t made too much of a fuss in the comics to date, so to be fair, we’ve yet to see the true range of his abilities in action. But needless to say, his power reaches awesome levels. Oblivion represents the inevitable end of all things, hence the name. He is capable of manifesting wherever he desires, and can empower others with his abilities if he so chooses. He is omnipotent.He has infinite cosmic powers.He’s also Death’s brother of sorts, not that Thanos would feel any familial obligations to him, really.

2. Magus
Magus is one of Adam Warlock’s most dreadful foes. That’s because he is Warlock; he’s a version of the character from a corrupted version of the future, in which Magus is the leader of an oppressive religious empire called universal Church of Truth, and is treated as a god. Warlock manages to alter his timeline so that he’ll never become Magus, but the character has still made multiple appearances over the years. According to Quasar, Magus is the universal counterbalance to Warlock, existing as his negative dark half, capable of all the things Warlock is able to do. He can manipulate energy, absorb life force, he’s a cosmic sorcerer, his most recent resurrection allows him to use quantum magic with his energy being rejuvenated by raw magic energy and souls. This means he can manipulate time, and transmute reality. All that and much more. Considering Warlock’s history with Thanos, and the fact that he’s even worked together with the mad titan when Magus threatens both of them, Magus is a threat not to be taken lightly. Plus, he’s managed to defeat Thanos in the past in personal combat.

1. Death
Death tops this list for VERY obvious reasons. Aside from being one of the most powerful entities in the entire Marvel multiverse, Thanos has a particular weakness when it comes to Death. Arguably, Death even has an advantage over the mad titan when he’s donning the infinity gauntlet because of this.Thanos is in love with Death.Thanos’ motivation in many of his story lines in the comics is to prove himself worthy of Death’s affections.Thanos rarely manages to win Death’s love. Death is often at the core of Thanos’ self-doubt, or at least a catalyst to him feeling wildly insecure, which has proven to be his downfall on occasion, even when he had the gauntlet in his possession.